What can we learn about Systems Inspired Leadership from team cycling? 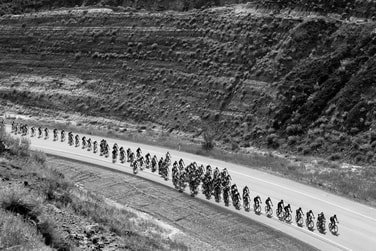 In this article, Katie Churchman explores the world of professional team cycling to understand the transformative power of systems inspired leadership. If you and your team have a mountain of work to conquer, what might be the most effective and efficient way of helping your team overcome these challenges?

Let’s take a look at Team INEOS – the world’s most successful cycling team- to understand how we can become a ‘king of the mountains’ in our personal and professional lives. Sometimes life throws us an unexpected uphill climb, so how can we- as a family, team or organization- pull together in order to quickly and creatively make it to the top?

In 2010, the UK based cycling team- formerly known as Team Sky- launched with the ambition of winning the Tour De France within 5 years. They accomplished their goal in 3 years with cyclist Bradley Wiggins, who became the first Brit to win the Tour. Over the last decade the team- who rebranded in 2019 as Team INEOS- has dominated the cycling world, winning 7 out of 8 editions of the Tour De France, to name just one Grand Tour. So, what is about Team INEOS that has enabled them to become one of the world’s most successful cycling teams in record-breaking time?

Whilst cycling teams have a dedicated lead cyclist, whose job it is to breakaway from the pack and ultimately win the race, these cyclists are only as strong as the team around them. For 100 + miles before the ‘breakaway’, the lead cyclist will be protected by his team and conserves energy by riding close to these other cyclists. Known as ‘domestiques’ these cyclists work for the benefit of his or her team rather than trying to win the race themselves. The effort of these cyclists goes towards pushing the air aside so that the lead cyclist can ride in their slipstream and save their energy for their final push in the race. So, whilst only one cyclist ends up wearing the yellow jersey- the signature chemise of the Tour De France- they get there because of the success of the team. Based on their strengths, everyone on the team has a different set of responsibilities and they all work together to help one key person win.

Now Team INEOS, led by David Brailsford CBE (former head of UK Cycling), has taken the meaning of ‘team cycling’ to a whole new level. The team doesn’t see themselves as just a collection of cyclists, but a whole system of mechanics, physios, designers and trainers to name just a few. And you might be surprised to hear that data scientists are also integral to the success of the team.

Big data has played a key role in the success of Team INEOS, since Robby Ketchell, the World’s first Tour De France first data scientist, was recruited by the team in 2014.  In an extract from James Witt’s book, ‘The Science of the Tour de France,’ Ketchell remarks: “This data-driven approach will reduce the speculative side of racing and tactics. It’s obviously more from the physiology side of things so not the whole picture, though the dream would be reaching a stage where you could measure motivation.” Through his work with Team INEOS, Ketchell continues to show the world the importance of big data when it comes to team cycling.

Whilst a few stats might not seem all that important, they are essential for measuring what Head Coach David Brailsford refers to as ‘the aggregation of marginal gains’, which is the philosophy of searching for little margins of improvement in everything you do. Brailsford explains it as “the 1 percent margin for improvement in everything you do” because when it comes to professional cycling, every 10th of a second really does count.

Brailsford encourages everyone involved with Team INEOS to seek out marginal gains. Some of these changes include changing the fabric of cyclist’s seats to improve comfort and rubbing alcohol on the tires for better grip. Yet, Brailsford’s team goes beyond the more obvious adjustments one would expect from a cycling team. They once brought in a surgeon to teach the riders the best way to wash their hands to prevent them from catching a cold; they work out which pillow and mattress will lead to the best night’s sleep for each rider; and they even paint the inside of the tour bus white so that they can more easily detect dust particles that might affect the performance of the team’s finely tuned bikes. When added together these minuscule changes made a whole lot of difference. In 2015, 2016 and 2017, Team INEOS won the Tour De France with Chris Froome, who also went on to win the 2017 Vuelta a España and the 2018 Giro d’Italia, making him the champion of all three Grand Tours at once. These tiny changes, from the quality of the cyclists’ sleep, to the fabric of their bike seats have had a huge impact on the team’s overall performance.

Brailsford’s philosophy focuses on seeking out small, daily improvements and is a great example of the power of systems inspired leadership. He empowers everyone involved with the cycling team to recognize the importance of their role and encourages them to look for small changes that will positively impact the team as a whole. As Brailsford remarks: “Forget about perfection; focus on progression and compound the improvement.”

So, whilst a 1% improvement might not seem impactful on its own, doing a 100 things 1% better will make a big difference. So how can you- like Team INEOS’ David Brailsford- inspire your team to search for a 1% improvement in what they do? And how can you make them feel integral to the success of the team? As we say in systems coaching, ‘the sum is greater than its parts’ and by the utilizing the intelligence of the system, teams of all shapes and sizes may find that they not only survive- but thrive- through challenging times. Instead of focusing on the mountain we have to climb, let’s connect with the team around us, and consider what we can do together- today- to create positive change. One small percentage at a time.