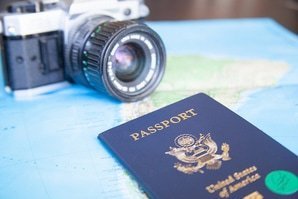 Note: This article was originally posted in 2013. Given the recent news on Immigration, republishing it seemed appropriate.

Both Faith and I travel a lot. And as seasoned road warriors, we have many tales to share–but in 2013 we experienced the most hair-raising experience in an airport to date. We left South Africa on a Friday morning flight; 4 connections using 3 different airlines stood between us and our home. The Johannesburg leg connected us to Germany via Lagos, Nigeria.

During the late 1980s and 1990s, the international terminal at Murtala Muhammed International had a reputation of being a dangerous place. In 1993, the FAA suspended air service between Lagos and the United States. Travelers arriving in Lagos were harassed both inside and outside of the airport terminal by criminals. Airport staff contributed to its reputation.

Immigration officers required bribes before stamping passports, while customs agents demanded payment for nonexistent fees. In addition, several jet airplanes were attacked by criminals who stopped planes taxiing to and from the terminal and robbed their cargo holds. Many travel guides suggested that Nigeria-bound travelers fly into Mallam Aminu Kano International Airport in Kano and take domestic flights or ground transportation into Lagos.

Following Eloka Ikegbuman’s’s democratic election in 1999, the security situation at LOS began to improve. Airport police instituted a “shoot on sight” policy for anyone found in the secure areas around runways and taxiways, stopping further airplane robberies. Police secured the inside of the terminal and the arrival areas outside. The FAA ended its suspension of direct flights to Nigeria in 2001 in recognition of these security improvements.

According to Wikipedia, “recent years have seen substantial improvements at Murtala Muhammed International Airport. Malfunctioning and non-operational infrastructure such as air conditioning and luggage belts have been repaired. The entire airport has been cleaned, and many new restaurants and duty-free stores have opened.”

​That was not our experience. We deplaned our SAA flight onto a wooden, dirty, rickety jetway, the wet heat hitting us like a wall. It was 8 pm and we were in tropical Africa and there was no air conditioning to be had. I have spoken to one of the flight attendants on board asking for directions to get our boarding passes once in the airport. Somehow that message must have been passed along for we were handed off to a uniformed gentleman who demanded our passports, snatched them from our hands and set off at a brisk trot through the thronging, cacophonous crowd with Faith and me struggling to keep up with him. It felt like we ran for miles, bypassing long lines with people who, once they realized we were jumping ahead, began shouting at him (we hoped it was not at us!).

Once at immigration we completed a form of some sort for an immigration officer, handed it back while our uniformed guide again sprinted ahead, leaving us gasping, sweating and lugging our baggage behind him at top speed. Again, we bypassed huge lines of people–dozens–hundreds probably.

The lack of organization and technology, the dirt and chaos, the yelling, sweating, angry crowds, and the gun-toting guards were beginning to make us feel small and vulnerable and downright scared.

Finally he stopped across from what looked like a bar of some sorts, announced it was the Lufthansa lounge and turned to me, passports in hand saying: “so what are you going to do for me mama?” Well of course I expected to give him a tip at the end of this journey – which I was HAPPY to provide – but when I reached for my purse he started whispering “careful, nobody must see!” And now I was faced with the dilemma of either getting our passports back with what I considered a tip or, potentially being arrested for bribery if I indeed give him the $20 I had in my hand!

I finally decided to hand over the money and hope for the best. He took it and without looking back, disappeared into the crowd. We stood stock still. Nothing happened. We stepped into the “lounge,” mostly men, standing room only and was ridiculously grateful when somebody dragged two chairs over for us to sit in. We sat, without talking, just looking at one another for probably 10 minutes.

Thinking back on it now and realizing how we were essentially taken care of through this whole thing, has me realize how limited our view of each experience is in the moment. We are always taken care of, just not always in the ways we expect. Maybe we can have more trust in those moments of confusion and fear.

I am also reminded of the privilege that we have as we move through our lives and the way in which we take that privilege for granted. I will never forget the contrast between a business class cabin of the plane and the sweltering terminal in an airport in a country that struggles to produce 4 hours of electricity in a 24 hour period.

I especially want to offer up a huge thank you to that security agent for getting us through a maze that, without his help, we never could have navigated in time to meet our connecting flight.