Part 3 of 5 – the 5 C’s of Good Relationships: Constructive Conflict 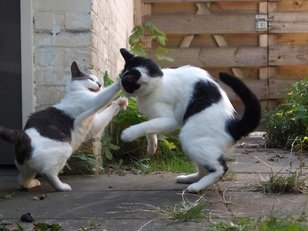 This is the third of a 5 part series on the 5 Cs of Relationship. The Third “C” is Constructive Conflict.

Of all the things couples fear, conflict is right up there at the top. For most of us conflict feels like snake handling or juggling fire, full of barely controlled dangerous power, on the edge of disaster. Yet some couples thrive on the intensity of it, and no question about it- having a fight is intimate. When we are arguing we are fully engaged, face-to-face, utterly absorbed with one another. Even if we walk away during a fight we remain preoccupied with one another, running scenarios about it in our head, what we should have said. I am amazed at the sheer energetic power of conflict.

Even after years of Buddhist practice and many years of training about conflict I can still be highjacked in an instant. Conflict is a sign of connection in intimate relationships. It means that our partner, or child, or family member is under our skin, has directly accessed us. It is a form of passion, albeit a painful form. Anger means we care. When I am working with conflicted couples I am usually not too concerned about the fights (assuming they are not using Horsemen.) Fighting is engagement in the sweaty work of hammering out a needed relationship change.

It is disengagement that sends off alarm bells for me. When one or the other partner no longer has the energy to get angry; when they have become detached, that is the signal that the relationship is in real trouble. The relationship has lost its energy and chemistry. They no longer care enough to be touched by the conflict. The opposite of love is not hate- it is indifference.

Styles and frequency of fighting vary enormously. Some couples are brawlers and others barely raise their voices. I find Gottman’s research very comforting on the topic. Like most people the researchers assumed that frequency of conflict would be a predictor of divorce, but that turned out not to be the case. It wasn’t the frequency of fighting but the style of fighting that was the predictor. Both high conflict and low conflict relationships can work fine as long as there are low levels of Horsemen.
​
There is another way to think about conflict. At CRR Global we hold that conflict is a signal from the Third Entity that something needs to change. From this perspective conflict is important information. Handled well, conflict is a mid-wife to constructive change. Conflict tends to occur when:

The comfortable shell of our relationship has gotten too small. Relationships are living entities that need to grow and evolve just as individuals do. Just like a crab grows out of its shell we periodically need to expand the definition of who we are together. These times involve a certain amount of pain and mess as the old tears away and tender new possibilities emerge. For example, Marita and I have gone from being psychotherapists to being coaches and consultants to being teachers – now we are beginning to be authors and keynoters. Every time we cross a new edge there is some adjustment about how to be together in the new land.

The old agreements or behaviors no longer serve in some way. As we evolve as individuals the old relationship rules need to change as well.

Colliding values. The most difficult conflicts to resolve are those around differences in values. Our values are our character so when they are challenged we feel it very deeply. Perhaps one of us believes in strict discipline for children while the other favors permissiveness. This clash in values will create strain.

One of us changes. Maybe one spouse has tolerated disrespectful behavior for years and now is no longer willing to put up with it.

Conflict is sometimes about emotional earthquakes. As we go about our busy lives we accumulate stress and strains as part of our daily living. These pressures may or may not be about our relationship but they are often triggered and released within it. Marita has often said to me, “Look I’m in a bad mood and it’s not about you, but if you keep standing here asking me about it, it’s going to become about you!”

During stressful times it requires awareness and discipline not to make each other the repository of our bad moods. This is addressed in Courtesy, the next blog installment.

​Bottom line- conflict is a critical component of maintaining your relationship, when it is done in a non-toxic manner.

Note: This was originally posted on our blog, ​relationshipsystemsintelligence.com in March, 2013
5.00 avg. rating (98% score) - 2 votes