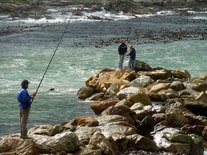 by Mish Middlemann
​
Both collaboration and competition are wired into our DNA – and it is edgy to feel them both in our blood and our behavior. Ronnie Ndlovu and I are just back from an ICF Johannesburg gig we co-led, where the participants experienced a modified Lands Work.

We invited them to explore and unfold the Land of Collaboration, the Land of Competition and the Land of Co-opetition. It was amazing! They got a visceral experience of each, and the collective wisdom that emerged was about holding healthy boundaries while collaborating to create a bigger pie – creating more abundance by sharing.

We grew up in an era dominated by individualism and competition. These human traits have driven the accumulation of wealth, power and technological advancement and taken the world to a place where we stare into an abyss of global inequality and conflict. Many decisions are still being made on the assumption that it is human nature to be narrowly selfish. Yet a bigger picture, going right back to the original roots of our species Homo sapiens in Africa, reveals just how much we are hard-wired for both collaboration and competition.

In the August, 2015 issue of Scientific American, the cover story highlights, there is direct evidence that Homo sapiens’ success in colonizing the earth, moving out of Africa from about 70,000 years ago, depended on our ability to collaborate beyond kinship groups. Our early ancestors here in South Africa found good reason to shift from individualistic hunter-gatherer mode: during tough climatic conditions about 100,000 years ago they banded together to defend rich shellfish deposits along the southern coast – and as we know, eating these “brain foods” in turn supported their development.

The full version of this blog can be found here. ​