What can we learn about systems inspired leadership by looking to the theatre?

​
Relationships are at the heart of everything we do, from the boardroom to the living room, relationships matter. By valuing ‘relationship capital’ we learn to experience ourselves as part of many wider teams, projects and systems. In this article, Katie Churchman draws parallels between systems inspired leadership and great theatre directing.

In many ways, Shakespeare’s famous line, “All the worlds a stage and all the men and women are merely players” is at the heart of great directing. The role of the director is to help the ‘players’ within a company, recognize the importance of their part and value their contributions towards the success of the overall production. And I believe the same is true of systems inspired leadership. Could systems thinking and the perspective of the theatre director be more similar than we might believe?
​
Join me as I sit in the director’s chair and consider how this perspective might help us to recognize the different systems in our lives and acknowledge the valuable intelligence that this viewpoint holds.
​
When I was at university, I spent most of my time directing plays as opposed to studying for my degree. Whilst I loved directing, my star-struck younger self longed for the spotlight and so I ended up pursuing a career in acting. Yet throughout my acting career, I found myself itching to sit back in the director’s chair. Not for the power, but for the perspective. The ability to see all of the moving parts at once: the multiple characters and their fluctuating intentions, the lights, the sound, the scenery, the costumes. Everything is in the director’s hand- and yet at the same time- the production is always greater than the sum of its parts. ​

Bad directors focus their attention on the ‘star players’ in a production. These are typically the lead actors or a named performer who’s got top billing. And this is often at the expense of all the other people involved in the production. Technicians and designers can find themselves locked out of the rehearsal room until very late on in the process. Fast-forward to the dress rehearsal and the director is shouting at these very same people for not understanding their ‘vision.’

My brother- Michael-currently heads up the lighting team for a new Cirque de Solei show in Hangzhou, China, so I know first-hand how hard technicians and designers work, without receiving the same applause as the performers. Michael’s role is demanding, often underappreciated and yet absolutely vital to the success of the production. Great directors recognize this and value ALL of the members of their team, whether they are cast or crew. ​ 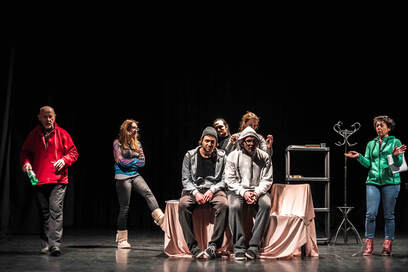 One of my favorite companies growing-up was the UK-based theatre and dance company Filter Theatre. They became famous for their explorative rehearsal processes that brought everyone into the conversation, right from day one. Actors, designers and technicians co-create together in the same rehearsal room to explore and experiment with the telling of old classics such a Chekov’s ‘Three Sisters.’

Great directors- like Ollie Dimsdale of Filter Theatre- create a safe ‘space’ within which cast and crew are free to ‘play.’ There’s no hierarchy or competition in these rehearsal rooms. Just a sense of mutual respect and being part of a team. The ‘players’ don’t simply show up and play their part in the production. They recognize that they are a part of a TEAM. A team that values individual contributions and also the collaborative intelligence of the whole.

As I transitioned from acting to coaching, I longed to capture this wider sense of self in the teams and the relationships I found myself in. It felt like a hugely powerful place to operate from as a leader, a partner and as a human being. So when I discovered Systems coaching I was immediately hooked. It was as if I had been given an instruction manual for accessing the ‘director’s perspective’ outside of the rehearsal room. And I must say it has been game changing.

The beauty of Relationship Systems Coaching is that it coaches people within the different contexts- or systems- of their lives. By transcending and including awareness of ‘self’ and others (EQ and SI), systems thinking heightens our awareness to the many ‘systems’ within which we operate and helps us to value our own truth and acknowledge a wider truth, that embraces all of the voices within a system.

As leaders, coaches and directors, it can be all too easy to think we need to have all of the answers. Yet with systems thinking, we are offered a helicopter view of the relationship, company or team, which helps us to step out of our individual perspective and access what is known as the intelligence of the system.

Live Your Life In The Director’s Chair

My journey into systems coaching has enabled me to look at my off-stage life through the lens of a director, a perspective that has positively transformed the way I view my life. Because just like a great director, systems inspired leadership is about recognizing and valuing the intelligence of the system. An intelligence that holds multiple perspectives, experiences, stories and truths. I believe this collective intelligence is where the magic of the theatre- and the innovative and creative potential of the world – truly lives.

So, why not join me in sitting in the director’s chair. Take a moment to think about your life as if it were a play and step out of the roles you usually play, at work, at home and in your friendship. What can you see from the director’s chair? And what valuable information does this position hold?

Inspired by a background in acting and writing, Katie is passionate about the power of storytelling and exceptional communication skills. When coaching leaders, teams and Early In Career delegates, Katie empowers her clients to take charge of their own life narrative both personally and professionally.

Connect with Katie on LinkedIn.